So Rob and I were sitting in the family room.  I was on my laptop answering FB messages and Rob was just looking at the picture on the fireplace mantle of Amanda. This is the same photo that was signed by Demi Lovato.  Beside the picture is a snowflake candle ornament that I got at Christmas from a gf of mine.  When you light a candle under the snowflakes, the heat makes the snowflakes spin.  Tonight, there is NO candle lit.  And this story is the truth. I don’t believe in spiritual things but …

When Rob started talking about Amanda and the picture, the snowflakes on the candle started to spin like crazy.  Then it slowed down and stopped.

Rob says – “It’s just moving from the heat from the fireplace.”

Carol says – “Then why did the snowflakes stop spinning when the fireplace is still on?”

Rob – looks at me and says nothing

At this time, Mandy (the dog that Amanda named) has come into the room, is looking at the fireplace and jumps onto the couch beside Rob.  In case you don’t know me well or at all, I am the spiritual skeptic.  I don’t go to psychics or mediums.  I don’t believe in the spirits.  But this one was too weird and timely.

PS and FYI – the snowflakes have not spun again all night. 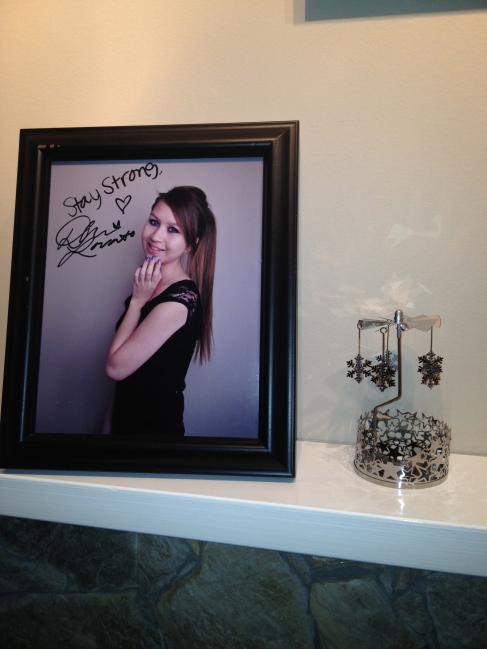