I just saw a posted article.  The title was ‘Google to Remove Child Exploitation Pictures and Videos form the Web‘ which are available online by using a new, picture-sharing database. – http://www.idigitaltimes.co.uk/articles/479506/20130617/google-remove-child-exploitation-pictures-videos-web.htm  That is a step in the right direction.  So much of the dark side of social media has been coming to the forefront and the key players of the internet need to step up.  Seeing this brings joy to myself.  It’s too late for Amanda and Rehtah and all the other children who have taken their own life but it’s in time for others.

I want to share with you a post that was in the blog I wrote for on Sunday titled Happy Parent Day.  It makes me sad that people (especially trained professionals) can be so heartless.  How can we attempt to teach children to be more empathetic and caring when we have adults that aren’t like that?  My heart goes out to this mom.   I can’t wait to meet her and give her a hug.  From one mom to another.  I dare to say I know how she feels and why, but I don’t think I do.  But I can offer my support, caring and love.  More dialogue is of course posted on my blog. 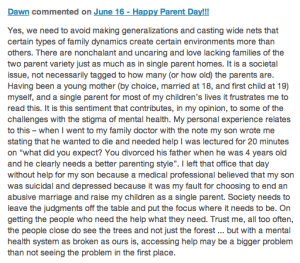 There was also an article today titled “Bullying in Children – When Parents are the Bully” .  It was an interesting read as it talks about ‘real and perceived power imbalance in parent and child relationships, even healthy ones. Repeated behaviors at home in other topics lead to habits, and it seems reasonable to make the jump that this applies to bullying parents and their children.’  The label of aggressive parents makes you wonder.  Could some parental behaviours be attributed to culture?  And how those parents were raised?  The sub-culture now is so different for the reason that at school, children are taught to talk about their problems to solve it.  50 years ago, not sure if this was the case.  Some of us remember the wooden spoon or the belt.  Times have changed and consequences have changed.  But there are also circumstantial reasons for everything and there are also the explanations that are heard.

I spent the evening with France last night and Sweden tonight.  Tonight was a radio correspondent from Sweden who came to Canada to report on cyberbullying.  He was in Nova Scotia for the first part and then came to Vancouver.  He asked lots of questions. Told me that in Sweden, the government, media and people are only just talking about cyberbullying. He talked to Rehtaeh’s mom last week and today it was my turn.  It interests me how other countries are continually using our stories in Canada to build documentaries from.  I forgot to ask him if they attempted to talk to any parents in the U.S.?

Going to one of Jesse Miller’s presentations tomorrow.  Early morning with a drive into Vancouver ….

7 Responses to June 18 – Hooray for Google