A busy day with lots of weird things  happening.  I will fill you in later tonight.  🙂

I cannot believe the affect that you have had on people.  Complete strangers even.  And they aren’t all from the area where we live, they are all around the world.  As far as Austria, Germany and even France.  These people truly care about you and what your message is to the world.  Surprisingly enough, they care about me also (and your brother and dad).  It’s amazing that your life and then your death is having a profound impact on the world.  However, I must say that with all the positives in the world, there are also the negative nellies and the ‘haters’ as you call them.  The haters certainly spread misery.  There was another death in the U.K. over a week ago.  Her name was Hannah and she was 14.  She was tormented on Ask.fm.  I think you had mentioned that site to me but you didn’t use it.  Your group of friends were on Formspring instead which is very similar.   And Ask.fm wasn’t really popular up here in Canada until recently.

Well, it has gotten lots of bad press.

There was an article today that said that Hannah sent hate notes to herself – http://www.thesundaytimes.co.uk/sto/news/uk_news/Tech/article1298958.ece?CMP=OTH-gnws-standard-2013_08_10.

Then there was another article where the mother of the founders of Ask.fm defended her sons about the website, but the mother didn’t know anything about how the website functioned.  Now if that isn’t slightly hypocritical.  http://www.dailymail.co.uk/news/article-2388980/Ask-fm-Mother-Latvian-tycoons-founded-website-centre-suicide-row-makes-shocking-attack.html

All this news just makes my head spin.  So many different things to tackle right now.  Once again, the way a human brain works is astonishing.  I was at a wedding/anniversary party tonight.  Met some new people who will ultimately become new friends.  It was a couple.  I will call them Jill and John.  Jill and I talked.  She had on one of your pink bracelets.  She must have gotten it a while ago because it was a bit faded.  I gave her a new one.  I introduced myself to her husband by just my first name.  It didn’t register with him that I was your mom…. until later.  I am sure someone told him.  Then he came up to me and asked for a ‘hug’.  He had no words to say except that he was sorry and to thank me for keeping your memory and message going.  Amanda, this is what I mean when I say, you have made impact.   When I get asked why I do what I do, I have one answer – “I will always be Amanda’s mom so will always do what I have to for my kids” – which ultimately benefits all kids and families.

Two more sleeps until Toronto.  That will be another interesting adventure.  You would have liked meeting ‘Alex’ and you should be here to travel with us.

Stupid girl!!  (I am allowed to call you that.)

Amanda, it’s all well wishers on my Facebook who help cheer me up.  This is the post that stood out for me the most today and made me cry the most.  You meant alot to Pam and we almost had you reaching out to her as another adult to talk to.   I love that Pam has these memories of you on video.  I have hours and hours which I need to get onto a DVD from VHS since you were a baby onwards.

P.S. Did you know that Mandy likes to sleep on the couch with your stuffies?

Love and hugs to my Princess Snowflake forever xoxo 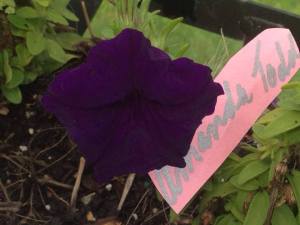 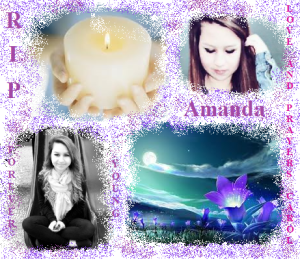