To my friends in both my real and online world,

Merry Christmas to everyone and to those who have sent special messages. So many messages I have received in the past week and I have felt badly because I haven’t been able to answer each message like I would have liked to but it’s way to hard emotionally to do so right now.  The band-aid got kind of wet and started to peel away from the ‘ouch’.  I know (for real) that there are other parents out there going through the same kind of emotional upheaval right now and it doesn’t seem to matter if it is Christmas #1 or Christmas #12.

So, if there is no immediate reply from me, it’s not that I am ignoring you. It’s that I am struggling with what to say and my emotions. As I might have mentioned before, this is the 4th Christmas with Amanda gone. It feels just like the first one with the deep sighs and sadness. I personally am not feeling that it gets easier with each year going by because the loss is still there. It’s not about forgetting or getting over it. It’s about missing someone you loved. Yes certainly, we have other family that we love and care about. And we don’t love them any less. There is just a hole and a crack in the heart –> and all the crazy glue, sticky tape, duct tape or whatever else you might want to try won’t mend that heart totally. Now I know how Humpty Dumpty felt.

My day with my family was good.  I still miss Amanda being Santa Claus and handing out the presents.  Or her squealing over the new Justin Bieber CD or the new colours of nail polish.  Amanda always brought life and spirit into our days.  So instead, the kitten has the spirit that Amanda possessed.   Watching the kitten play with the paper and jump all over the plastic bags that made crunching noises.  But .. the kitten (I found out today) also likes to eat raw bacon and lick the chip dip bowl.  (I only turned around for a second.)  And —> I only misplaced one present this  year and it belonged to Charlee the terrier.  I will find his present eventually somewhere in the house.

The other day I put out on my Facebook that if anyone didn’t have a place to go for Christmas, my door was open.   Someone took me up on it and messaged me.  He only wanted a homecooked meal.  I wasn’t sure that he was going to be able to find his way to the alcoves of Port Coquitlam but he managed to find his way.  Rob cooked the #awesomely #yummy turkey as he usually does.

Donald arrived and I went into mother mode.  Making sure he was fed healthy snacks before dinner.  Okay – he liked the potato chips but I threw in some apples, grapes and bananas in there too.  I literally was fascinated by the amount of food he could pack into his body.  Before he left, he had a new duffle bag to use for all his things, new warm soft socks, a jacket, a hoody and clean Bouncy smelling clothes.  We managed to find him a place to stay for the week also at a minimal cost.

My experiences this Christmas season have been phenomenal for #givingback.  Some on my own and some with Amanda’s Legacy.  These were some of the notables:

It feels good to give back. It filled a part of the void where Amanda is not there.  Another story was shared with me from someone in Nova Scotia: “There honestly has to be more nice people and less bad people in this world. Everyone should treat with respect as we are all human. That’s so nice of you though, I bet it made the guy the happiest. It’s always the kindest people too that have no home. I can just imagine how happy that fella would be! I can relate to that. I was fishing once and I was catching a bunch, there was a older guy beside me and he wasn’t catching anything, he never had the right set up cause he couldn’t afford it so I walked over gave him 5 dozen fish he was unbelievably happy he said now he will have food for the table then he offered me a little money that he had but I said no you keep buy stuff you need. He was really happy, it makes me happy when I can make someone else happy.”

If I could make one suggestion this Christmas Day, it would be to take some time to reflect on life in general – thinking about what you have and don’t have and what you want out of your life.  Reality is that we are here on earth for a short time and if you could be remembered for one thing, what would it be.  Sometimes all it takes is a ‘Hi – how are you?’ or ‘What can I do to help you?’

We all think of Amanda but we need to remember that all she really wanted was for someone to stop and ask how she was doing or to help make her bullies stop.  I received a post on my You Tube wall that I am trying to find the source of.  I will write about it in the next couple of weeks.  Until then, all it takes is a CARING SMILE and a HELPING HAND. 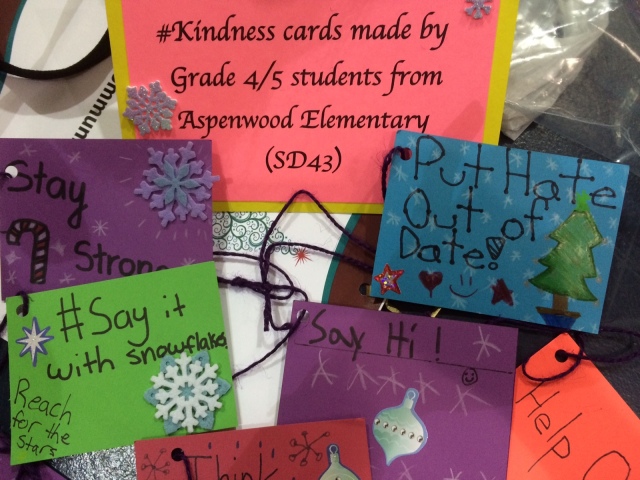 1 Response to The fourth Christmas …